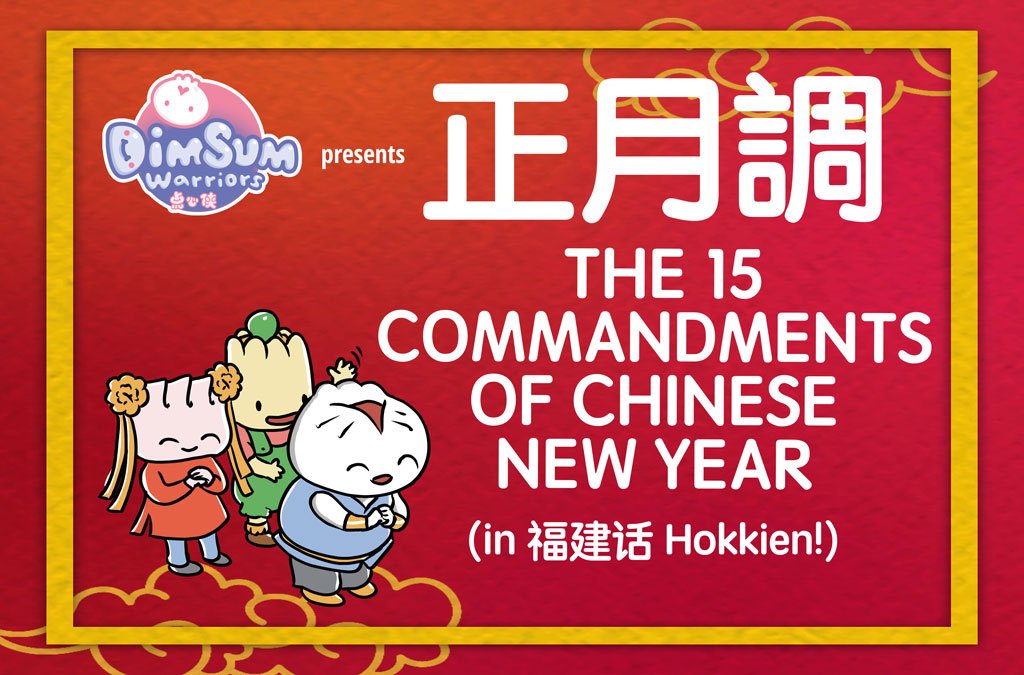 Here’s a super fun chant for you for Chinese New Year 2023! The first day will be Sunday, January 22nd this year!

Heard the song ‘The 12 Days of Christmas’? Well, here’s a Chinese equivalent. Though true to stereotype, it’s not about your true love giving you lords a-leaping or geese a-laying or anything, but rather, it lists all the stuff you have to do over the 15 Days of Chinese New Year!!!

The song/chant is called 正月调 (zhēng yuè diào) and we learned about it from Ching Yi, our super-talented Taiwanese colleague who designed all our lovely eCards. We thought it was so cute that we got her to make a video of it, featuring the voice of 10-year-old Chen Hua, who does some of the voices on our Dim Sum Warriors app.

It’s a traditional 念谣 (niàn yáo) chant that’s normally recited in the Hokkien dialect which we’ve translated for you here, along with pronunciation in 汉语拼音 Hànyǔ Pīnyīn and also 臺羅拼音 Tái luó pīnyīn, Taiwan’s official Romanization system for Hokkien words. Learn it for Chinese New Year and impress all your relatives!

Note: Tái luó pīnyīn is often abbreviated as “Tailo”, and is derived from 白話字 Pe̍h-ōe-jī , which Western missionaries working in Southeast Asia in the 19th century developed to transliterate Hokkien—specifically the Hokkien from the Amoy region, where a lot of the Hokkiens in Singapore and Malaysia hail from. Both Tailo and Pe̍h-ōe-jī do not follow the same Romanization patterns or tones as hanyu pinyin (which was only introduced in 1958).

Follow these links so you can find how to pronounce Tailo and learn more about the fascinating history of Pe̍h-ōe-jī.

So each line is presented as follows:

正月調
Tune for the 1st Month of the Lunar New Year

Wake up early to pay your respects to your elders, ancestors, and gods.

Wake up early so you can visit your mother’s side of the family to pay your respects.

Phew! After 2 days of waking up early, it’s nice to be able to have a lie-in.

The 3rd day is also supposed to be 老鼠娶亲 lǎoshǔ qǔqīn, or the Rats’ Wedding Day. It’s considered good form to go to bed early and sleep in, so as not to disrupt the rats’ celebrations.

On the 4th Day, the Gods return to Earth from reporting to the Jade Emperor up in Heaven. So celebrate their return with a feast!

Shops and businesses may prepare to reopen for business!

隔开 Gé kāi could loosely be translated as ‘cut it out!’, so in other words, time to get back to earth from all the partying!

Clean the toilets! Especially because tomorrow is a big festive day and there might be guests!

Seriously, though, people used to believe that one should not clean the house in the first few days of the New Year festivities, as it would risk “sweeping away good fortune”. So the sixth day was when you could finally get around to it. Celebrating doesn’t mean you can stay dirty!

The 7th day of Chinese New Year is 人日 rén rì or the Day of the Humans, as legend has it that humans were created on the 7th day. It is now commonly celebrated as “Everybody’s Birthday”. In China,  dishes like “seven vegetable soup” (七菜羹 qī cài gēng) and “seven vegetable porridge” (七菜粥 qī cài zhōu) are specially prepared for the 7th Day. Malaysian and Singaporean Chinese celebrate with “Seven-coloured raw fish” salad (七彩魚生 qīcǎi yú shēng), while in Taiwan, people like to eat noodles to symbolize long life.

Get back to work—we really mean it this time!

完全 wánquán means “completed” and the 8th day of Chinese New Year marks when the “official” festivities are over, so everyone has to get back to work as usual.

Celebrate the birthday of the boss of all the gods!

It’s the birthday of the Jade Emperor (known as 玉皇 yù huáng or 玉帝 yù dì), who is the ruler of all the deities in Heaven. Prepare lots of food as offerings!

Feast on the food you prepared for yesterday’s birthday of the Jade Emperor!

Day 11: Invite your sons-in-law for dinner!

Invite your sons-in-law over for dinner! (So you can get to spend time with your own daughters.)

Day 12: Invite your daughters back for porridge and veggies!

Invite your daughters for a simple, healthy meal of rice porridge and mustard greens.

Day 11 and 12 are contingencies, because daughters may be so busy with entertaining their husbands’ relatives that they can’t get back in time to celebrate with their own families.

Pay your respects to 關公 (Guān Gōng: “Lord Guan”), the God of War… and other things!

Originally a general during the Eastern Han Dynasty, 关羽  Guān Yǔ was so respected for his achievements that he was made a god over three hundred years later during the Sui dynasty (AD581-618). But what made him really famous was his portrayal in the 14th-Century historical novel ‘The Romance of the Three Kingdoms’.  Guān Gōng goes by many names, and is often portrayed in statues with a red face, heavy beard and carrying a green sword. Although called a god of war, he is also worshipped as a promoter of righteousness and peace and people pray to him for wealth, luck, fertility, marriage, health and many, many other things.

Follow this link to read more about Guān Yǔ.

The moon begins to grow full!

One last party before we turn off the lights!

The final day of the Chinese New Year celebrations is officially called 元宵節 yuánxiāo jié, and many parts of mainland China, such as Chengdu, Hangzhou, Shanghai, as well as Taiwan, celebrate it with the lighting of lanterns and eating special glutinous rice dumplings called…what else? 元宵 yuánxiāo!

Yuanxiaon are a bit like 汤圆  tāngyuán, glutinous rice balls eaten during the Winter Solstice Festival, but not exactly. Here is an article where you can learn more about the differences between yuánxiāo and tāngyuán.

So is 正月調 the Chinese version of ‘The 12 Days of Christmas’? It might not involve receiving gifts from your true love, but who really needs pipers piping or drummers drumming or all those birds and a partridge in a pear tree? That would mean a whole lot more to clean than just toilets!

正月調 is also very much more family- and community-oriented, and there’s a lot of celebrating involved.

Follow our video and try reciting it for yourself in Hokkien—especially if you have grandparents and older relatives who understand it! Dialects are actually a great way to connect with Mandarin itself… they deepen our personal connection with wider Chinese history and culture, and also add colour and nuance.

You might also enjoy reading our special Lunar New Year story CELEBRATING IS HARD WORK! 庆祝好累人!  To read it, you have to be a CLUB or PLUS+ Member.

Even more on our BLOG

Wu Ching Yi is Yumcha Studios’ in-house translator, animator and illustrator. She provided the inspiration for this post, and to show our gratitude, we made her put together a video of it! You’re welcome, Ching Yi!

Colin Goh, who illustrates all the Dim Sum Warriors books, was made to research and write the post, because as Yumcha Studios’ in-house banana (yellow on the outside only), he really ought to learn more about his Chinese roots! His Chinese reading ability was taxed to the max because all of the sources were in 繁体字, the super-complicated traditional script that Singaporeans aren’t taught. He would like to acknowledge the help of Google Translate.