Why is Drawing Important for Children’s Development? 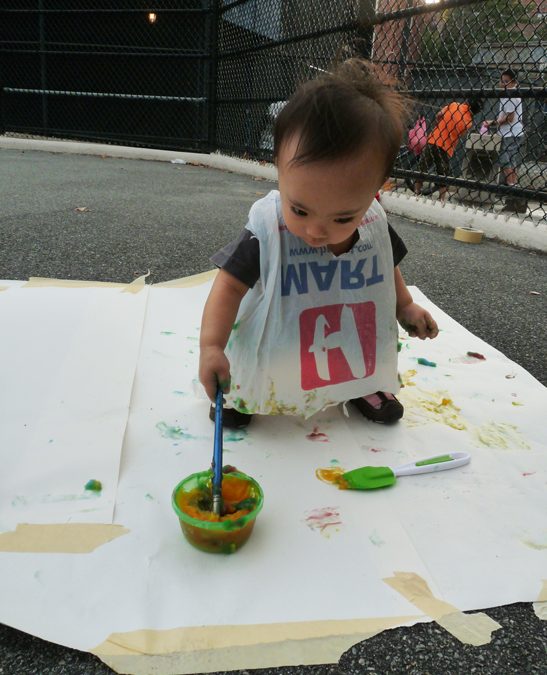 Making Something Out of Nothing

My daughter loves to draw.

(Her nickname is Yakuza Baby—or YB for short– because she was born while my husband and I were watching a Japanese gangster film. It’s really quite a story for another time.)

Her drawing journey has been fascinating to watch.

She recently turned 12 and told me that: 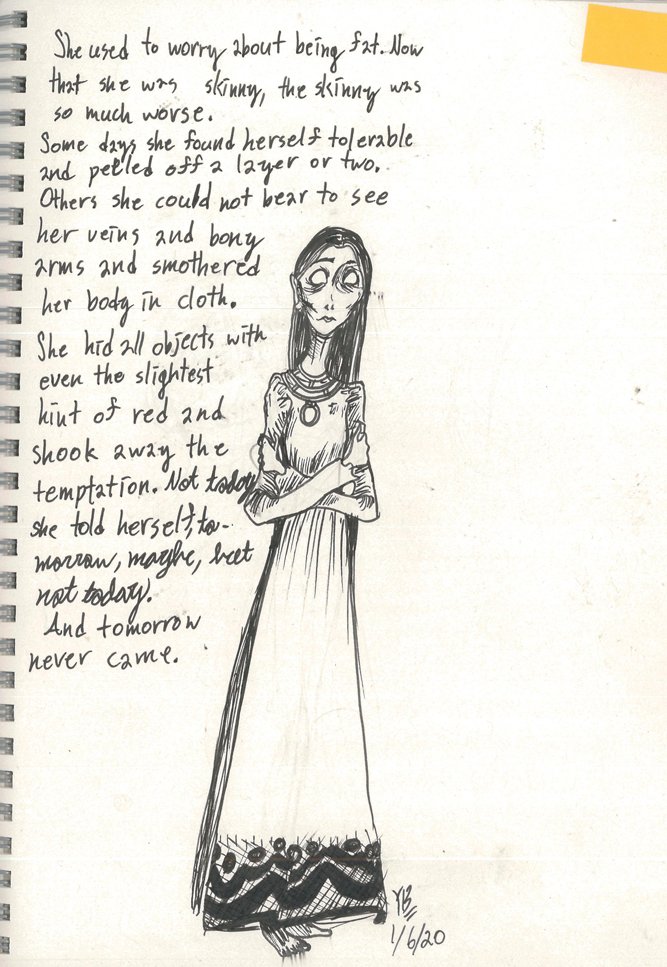 Most grown-ups believe that the most valuable tools our children can pick up are reading and writing, whereas drawing is often regarded as a leisure activity—a nice skill to have, but not really important.

Our experience watching YB’s drawing journey, however, suggests that drawing hasn’t just been some cool party trick or idle hobby—it’s served as an important form of glue that connects all the different aspects of her learning.

With YB’s permission, I have:

I will answer the following questions: 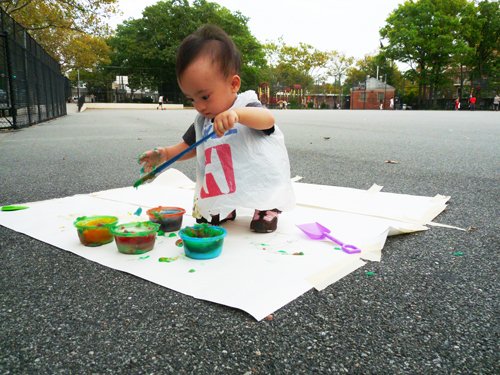 YB first started drawing “seriously” when she was around 17 months—meaning that it was an activity that engaged her for a prolonged period of time. Since then, she has loved to draw more than playing games on the iPad or watching TV, and even more than surfing on Youtube!

YB’s drawing at this stage seemed like just marks on a page—developmental experts call this “the scribble stage”.  Susan Sheridan, the art and education scholar, talks about how the “scribbling child” can talk about her scribbling, which are not just meaningless scribbles. 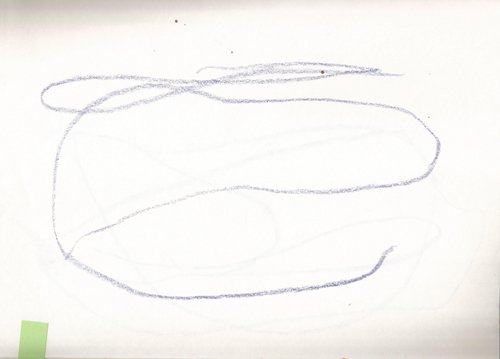 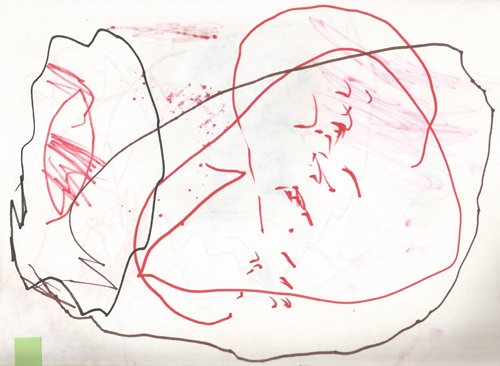 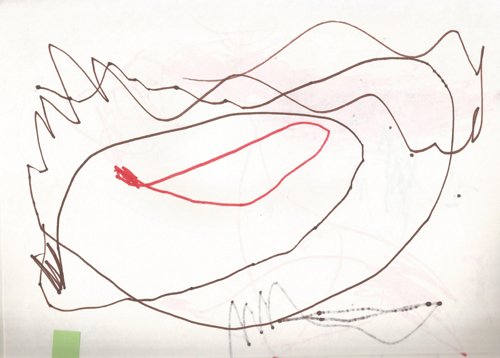 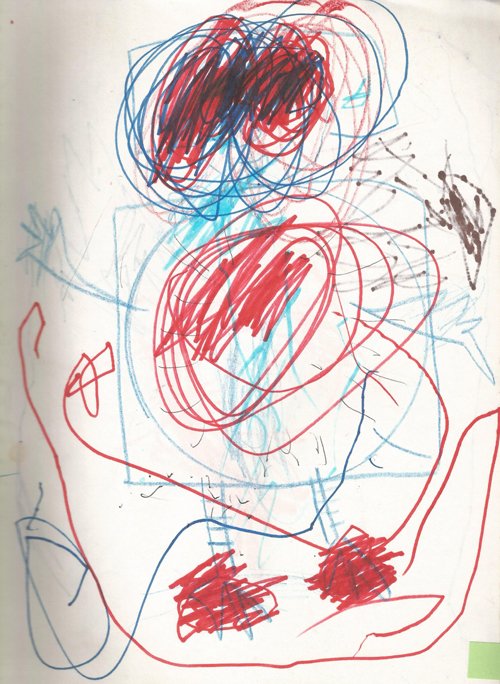 All we did at this stage was to provide YB with loads of paper, pens and pencils.

She drew on walls too, which annoyed my husband Colin tremendously, so I designated a wall under the dining table where she was free to crawl under and draw in secret.

Whenever we went out to places where we had some waiting to do, such as in restaurants, we would also make sure to bring along some  pack her drawing supplies. Instead of giving her a digital device, we would have pencils and a notebook for her to draw in. To this day, she never leaves the house without a notebook and her pens and pencils.

We didn’t know at that point in time that drawing would shape her life and the way she understood the world so significantly.

Surprising Things that Drawing Enabled YB To Do

Drawing provided a space for her to visualize what she’s thinking even before she had the words to describe her thoughts.

Here’s a piece she drew at 4 years old, which she described as “Family – Papa is stressed while Mommy is cuddling Baby” 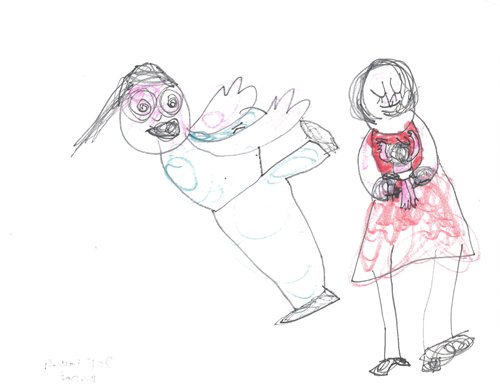 Drawing would become her tool for making new friends and even people who speak different languages.

Here is YB at 5, drawing portraits for friends and passers-by at the Brooklyn Book Festival in New York City: 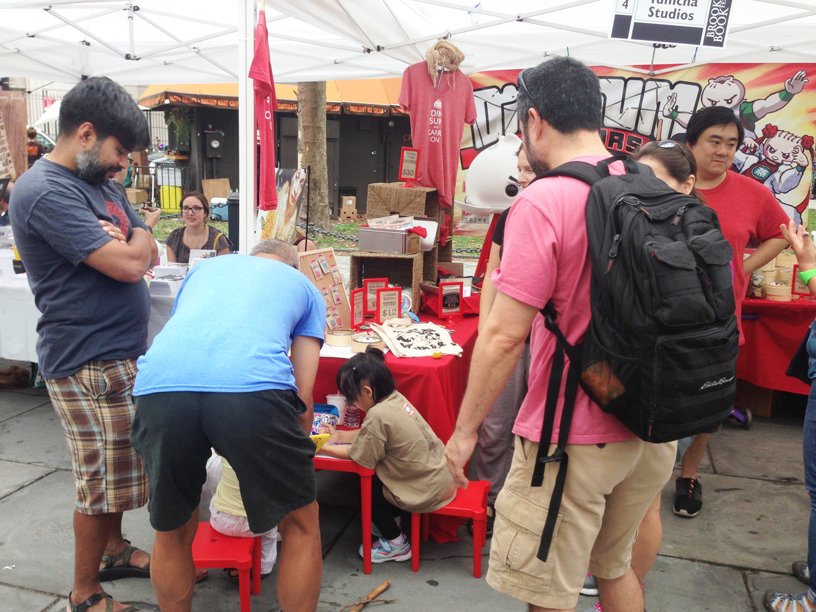 Drawing would lead her to become a confident reader and writer in two languages.

When we first moved to Taiwan, she could not read or write a single word in Chinese, and my husband and I were of limited help as we were not taught the traditional/complex script （繁體字）that Taiwan uses.

As YB explains, for her, understanding Chinese words was often about connecting it with pictures, meaning she understood the characters more when she could “draw” its meaning. For example, she imagined the word “力” as a strongman flexing his muscles. 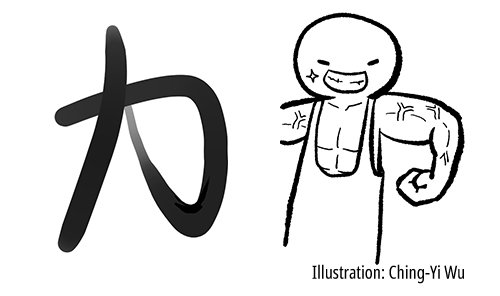 In other words, drawing has helped her remember and interpret what she reads.

In this series of cartoons which she did at age 4, she wondered, “What if the Sailor Moon characters were dark instead of cute?” 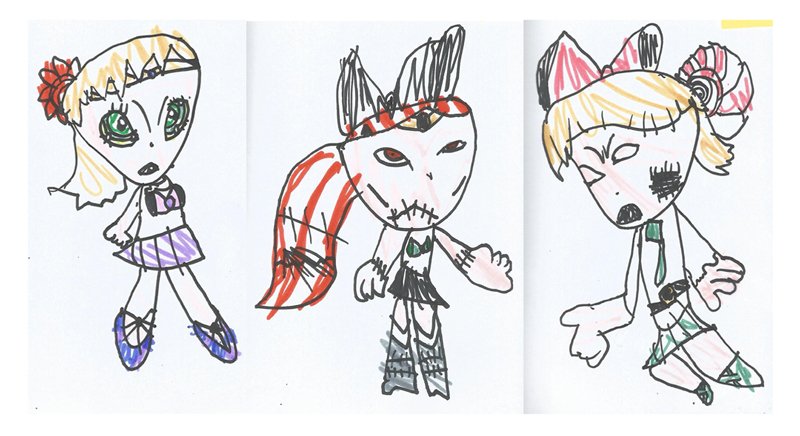 Reinterpretations or asking “What if?” were a constant source of amusement to her. Here is a picture she did at age 7 of the characters in My Little Pony, after visiting a Tim Burton exhibition: 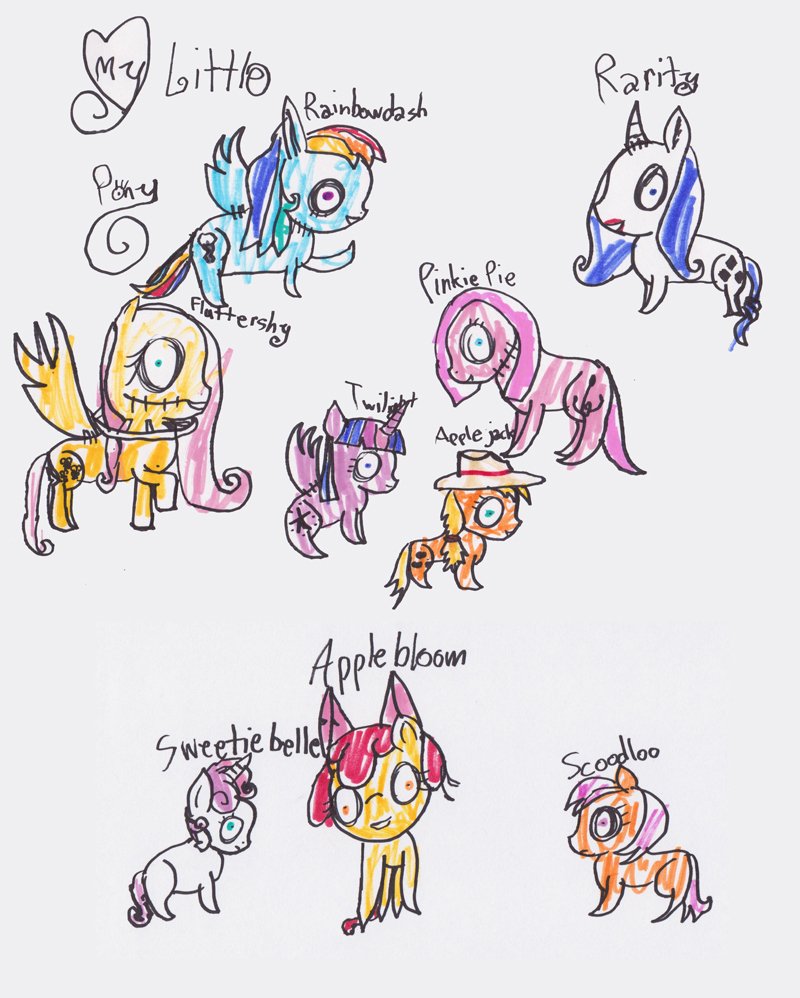 And here is another interpretation of the Ponies, this time as warriors, done when she was 8, possibly after watching the Wonder Woman movie. 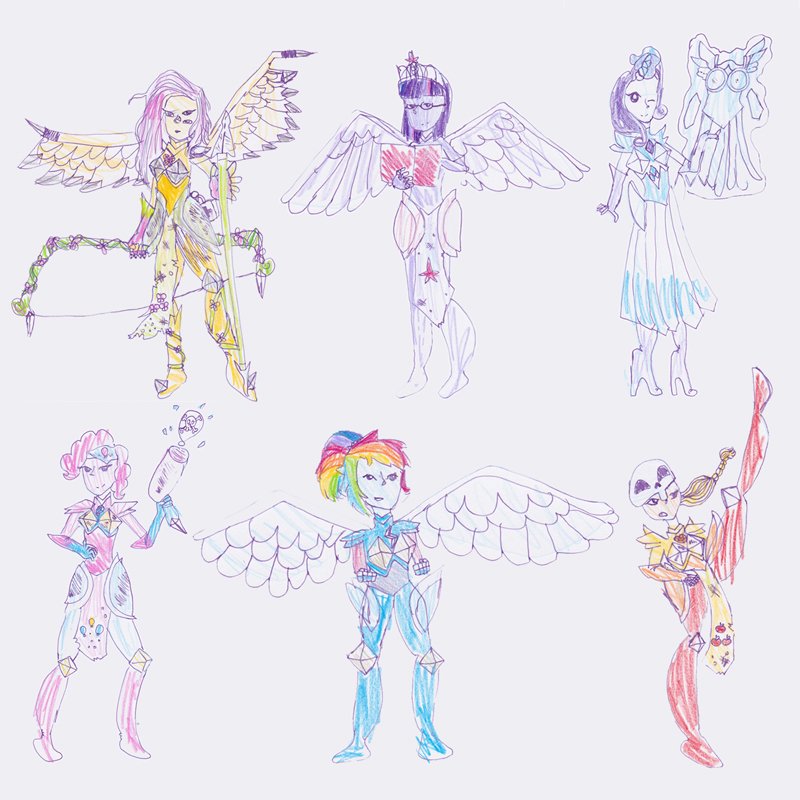 She likes re-imagining characters—even her own.

When she was 6, she created a story featuring a character named “Midori”, whom she redrew when she turned 11. YB says she likes going back to old characters because of “nostalgia… and sometimes I feel a bit guilty for dropping them. Old Midori was happier while the current Midori feels darker”.

More than anything, though, drawing has become an important way for YB to consolidate and express her feelings. Here is a little story she did when she turned 11 and is her first comic in Chinese, which got exhibited on her Taipei elementary school’s board! 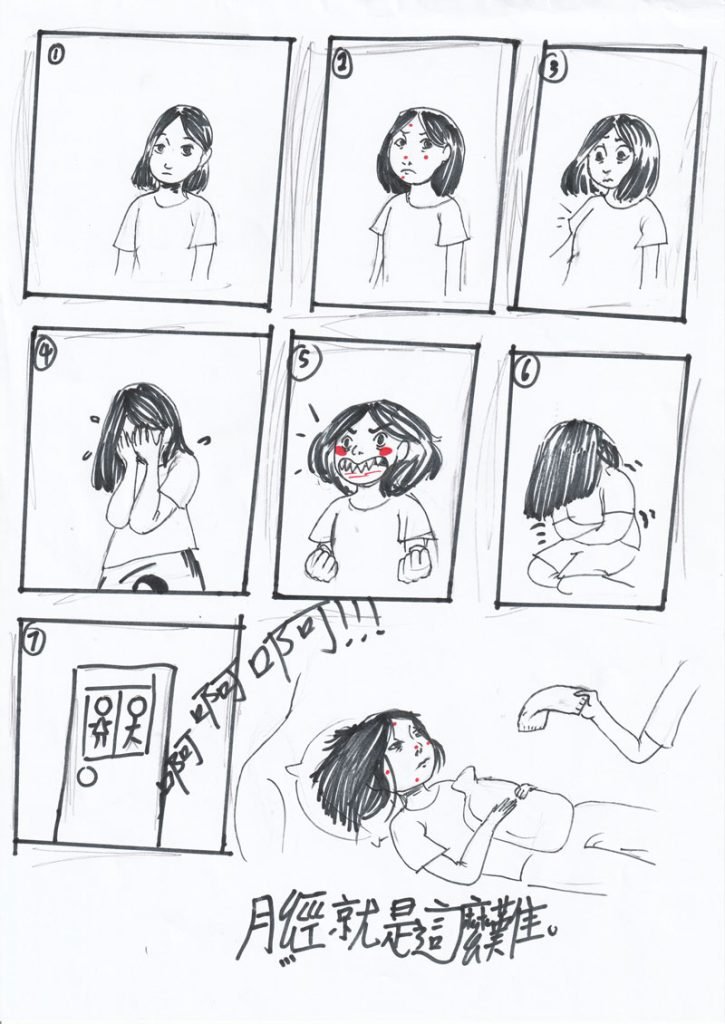 Drawing has also served as an important catalyst for her creative writing. She might be watching a show, reading a book, or playing with dolls, and all these experiences might come together to form images, which are then expanded upon into a story.

I suppose it’s inevitable, considering what we do, that YB has begun creating her own graphic narrative stories—sometimes full comics, and sometimes illustrated prose.

Below is a piece she did when she was 11. She explains,

“This is a story that was inspired by playing dolls with Flora and also by watching “Mindhunter” on Netflix.  I started drawing this first, and then writing. It helps me have a picture of what’s happening and I then know where to put my words.” 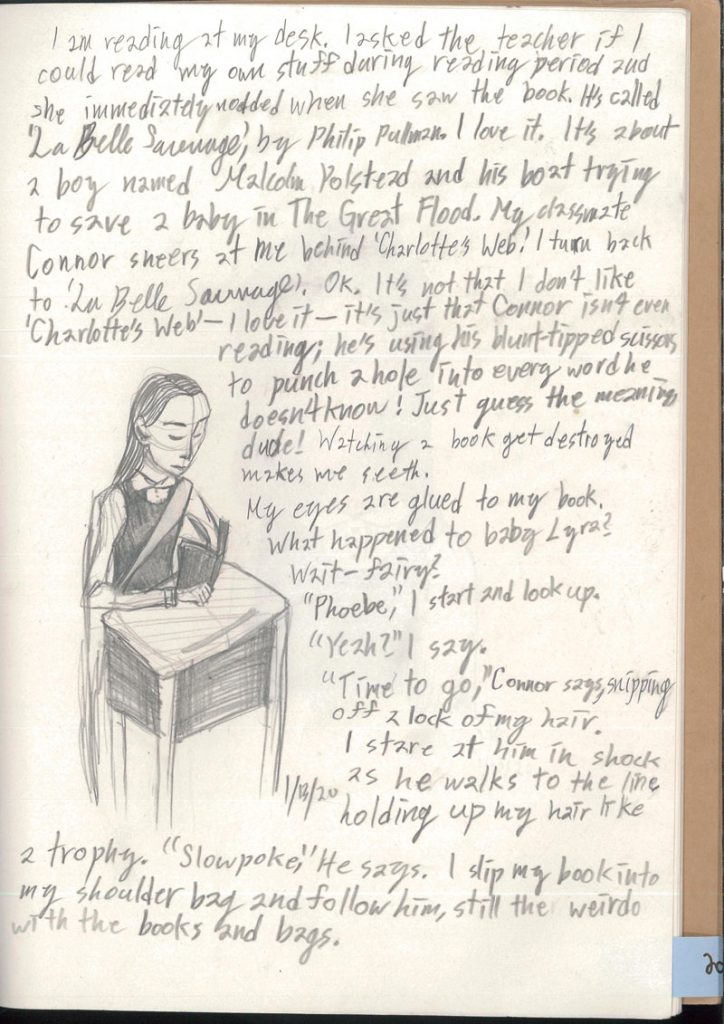 What Does The Research Say About Drawing?

Here’s a piece YB did when she was 4: 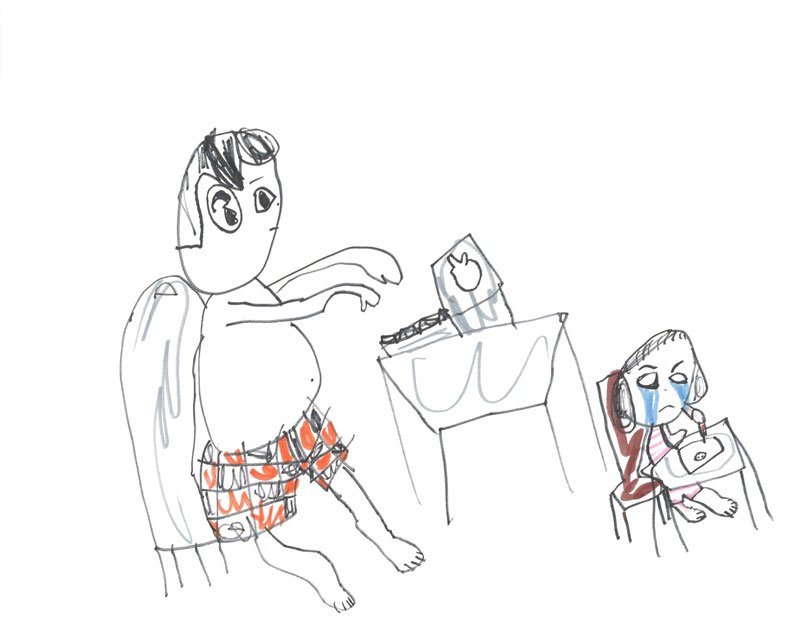 “I really wanted Papa to draw with me  but he was busy working,” she recalls. After presenting her Papa with this piece of art, he felt so guilty that he dropped all his work and drew along with her! So drawing proved far more persuasive than whining!

I was very surprised by this other piece YB did when she was around 4, featuring her favourite cartoon characters, ‘The Powerpuff Girls”. When I asked her to explain what was going on, she said,

“Buttercup is dead, but she’s smiling because she knows something that Blossom and Bubbles don’t know.” 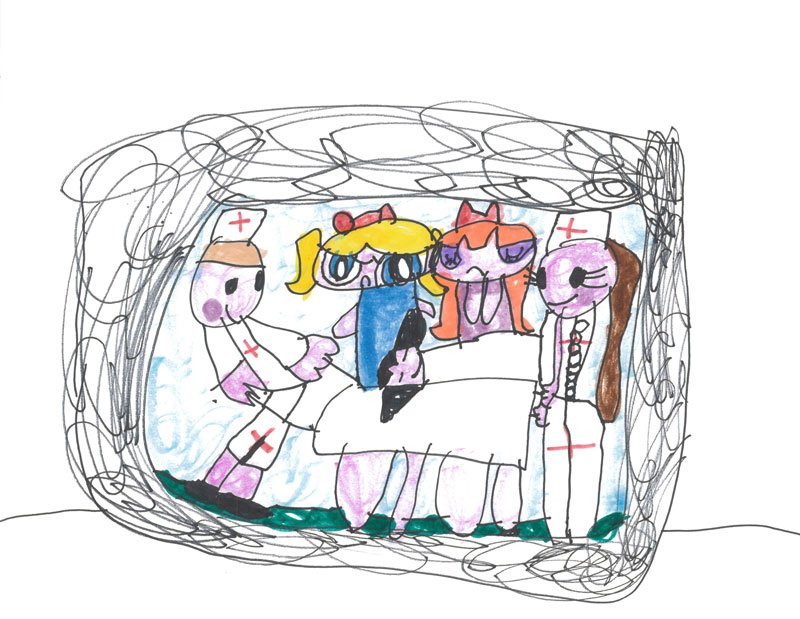 “… If parents and teachers let children scribble and talk about scribbling, draw and talk about their drawings, write about their own drawing … children will move more naturally into writing and reading…. Until the child knows what the hand has drawn, the work of the hand – and thus of the mind – remains an unspoken mystery”  — Susan Rich Sheridan (2002), The Neurological Significance of Children’s Drawing: The Scribble Hypothesis.

When she was 6, YB was puzzled at why Cinderella wanted the Fairy Godmother to send her to the ball instead of, say, getting her out of the house or giving her a lot of money. Then she drew this story, where Cinderella asks for “art supplies” and “plain white paper that lasts forever” and then lives happily ever after.

Here are two more of her reinterpretations of cartoon characters in the style of Tim Burton: 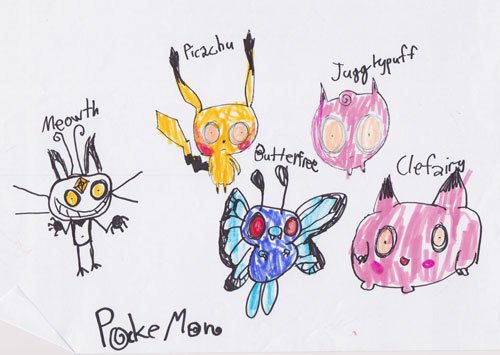 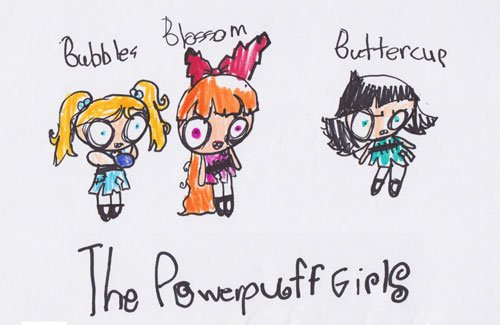 In fact, psychologists urge parents to encourage and support drawing, as it has so many benefits for children’s development.

“Drawing is not just for children who can’t yet write fluently, and creating pictures is not just part of rehearsal for real writing. Images at any age are part of the serious business of making meaning – partners with words for communicating our inner designs” – Ruth Hubbard (1989), Authors of Pictures, Draughtsmen of Words.

“If early in life, children have the opportunity to discover much about their world and to do so in a comfortable, exploring way, they will accumulate an invaluable “capital of creativity” on which they can draw in later life” – Howard Gardner (1993), Creating Minds.

“Drawing can enhance children’s spatial awareness, promote their STEM learning [3] and even help children regulate emotions during times of stress! [4] Psychologist Lev Vygotsky wrote that drawing is part of symbolic communication system that includes speaking, reading, and writing as it unfolds through development. [5] In a very real sense, children’s scribbles, doodles, and sketches serve as a developmental bridge between spoken and written forms of language” –Thalia Goldstein, (2018), The Developmental Magic of Children’s Drawing.

Kids often stop drawing once they enter formal schooling… partially because they begin to fear criticism, partially because their drawing isn’t quite like what they are seeing in their heads, but mostly because adults—and the education environment we have created—simply doesn’t value drawing very much. There are other activities we need to cram into their busy schedules, which we deem necessary for their “enrichment”.

As YB told me,

“In school, the grownups often say, ‘Stop drawing! Pay attention’. Just like that.  It feels like you’re meant to stop drawing forever.”

“Kids start seeing that other people’s drawings are better than theirs. I hear a lot of my friends say, ‘my drawing is so bad’ and then they stop, or they just copy other people’s art. Many people actually like seeing copies and tell kids who copy others’ art that ‘you are so good’.  But there’s no such thing as ‘bad art’ or ‘good art’! What’s important is that you enjoy it, and you get something out of it… When you express yourself, it’s a relief.”

How Do Adults Encourage Drawing?

In our home, we never sent YB to art class.

And even though Colin is an artist, he has never formally sat YB down to teach her in any systematic way. YB has pretty much followed her own curiosity; if she wants to know how to draw something, she’ll just ask him.

In fact, her Taiwanese elementary school teacher advised us not to send her to art classes, because many art classes are about copying particular styles and producing something parents can hang up, rather than encouraging imaginative thinking. It’s true that many entries in children’s art competitions look stunningly similar. If you choose an art class for your kids, make sure that the sessions always get kids to ask “What if?” rather than fixate only on technique. The creative process is much more important than a pretty product.

We can encourage drawing by:

We often think of drawing as an innate ability—I am either “talented” or “not talented”.

Many people have said that YB has merely inherited her father’s “drawing genes”, which upsets her because the truth is that she draws well simply because she has spent hours and hours—since she was one plus—working on drawing.

She has, of course, been encouraged and inspired by watching her father draw, but she explains,

“anyone can draw… if you enjoy it, spend a lot of time doing it, and you express yourself boldly and confidently.”

We have seen the benefits of drawing and experienced it firsthand, and it has been substantiated by research as well. That is why in the Dim Sum Warriors Club, not only are we making it easy for kids to read hilarious bilingual comics, we are also opening up our experience of drawing and chatting with families and schools.

In a world where so many of us are so distracted by devices, the simple act of putting pen to paper, creating something out of nothing is, as YB tells me, “such a relief”.

Did you know that through the Dim Sum Warriors Club, kids can be immersed in the world of

Sheridan, S.R. (2002). The Neurological Significance of Children’s Drawing: The Scribble Hypothesis. Paper presented at the Toward a Science of Consciousness Conference (Skovde, Sweden, August 2001).